Did you know that freight trains are just as loud as trucks? Both have a sound level of 90 dB (decibels). The pain wave, i.e. the noise level considered hazardous to health, is between 120 and 130 dB. Nevertheless, the noise generated by freight trains is often particularly disturbing for people living near railway lines. For reason. However, the solution is already in sight. New, low-noise braking systems will ensure that trains become almost half quieter in future.

Anyone who lives along railway lines or goes on holiday knows the problem: freight trains thundering past, which cannot be overheard and can impair sleep at night. This is mainly due to the rolling noise generated between the wheel and the rail. The noise is caused by worn running surfaces of the wagons, which hit rough rails. This is about to change soon, because freight wagons are to be equipped with so-called whisper brakes all over the country. This means that they will be converted to new, low-noise systems with modern composite brake blocks. This reduces noise pollution audibly.

Rubber instead of grey cast iron

Where metal grey cast iron brakes were previously used, they are now to be replaced by brake pads made of rubber and copper composites. These are more elastic and much quieter materials. 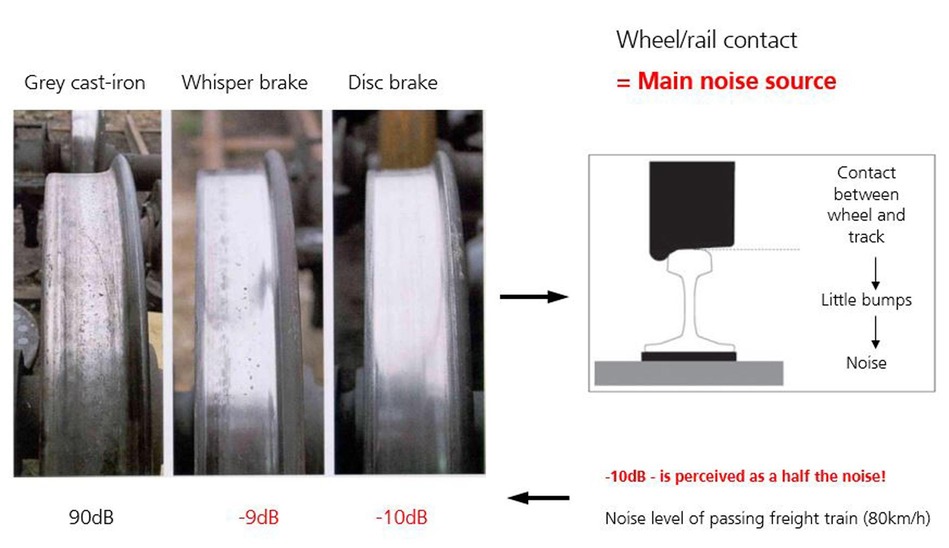 This is because the tread surfaces of the wheels are roughened during every braking operation with grey cast iron brake pads. With so-called whisper brakes, they remain smoother. This is why freight trains equipped with composite soles or LL soles (“low noise, low friction”), which have been approved since 2013, cause less noise. The smoother surface makes the rolling noise considerably quieter. And the difference is audible! Trains running with such whisper brakes cause up to ten decibels less noise. This means that the trains sound almost half as quiet as conventional wagons with grey cast iron brakes. More than 40 percent of the wagons used by Rail Cargo Group in Austria are already quiet.

The Rail Cargo Group is one of the rail logistics companies that equips its freight wagons with the new, quieter brakes. All newly procured wagons have been delivered with modern, quieter brakes since 2007. In concrete terms, the proportion of quiet wagons will increase from 43% at the beginning of 2018 to around 55% at the end of 2018. As a result of the continuous investment in the rolling stock, more than 90% of the Austrian ÖBB freight car fleet will be converted to quiet brake pads by the end of 2021. More than 7,000 freight wagons will then be running on quiet brake pads.