Maruša Pahor is a very relaxed person. Which is a good character trait, since she is a locomotive driver for the ÖBB Rail Cargo Group where she is responsible for the heavy freight, which she transports punctually and safely through Slovenia and thus from A to B.

When she was a kid, she already loved trains. Maruša Pahor grew up with the railways since both parents are working for the Slovenian railway. However, she had not really dreamt about driving trains until she read a job advertisement.

Rail Cargo Carrier d.o.o., RCG's railway company in Slovenia, was looking for locomotive drivers. She applied for the job and at the beginning of 2016, Maruša began her training as a locomotive driver.

One year later she had licence.

Since then, she has been travelling the entire Slovenian rail network, driving freight trains from A to B, which different kinds of locomotives. After all, she was trained for three different series of electric locomotives and one series of diesel locomotives. This creates flexibility and a broader applicability.

What she particularly likes about her job is the dynamics that this profession has, and the indescribable feeling of 10,000 hp.

"It's a big responsibility to be in charge of thousands of tons of goods and it makes me proud at the same time."

Maruša Pahor about her job as a train driver

Sounds good to us. Together with her colleagues, she makes a decisive contribution to getting the goods to their destination safely and on time - whether within Slovenia, throughout Europe or far beyond, to the other side of the world.

She never gets bored because variety is guaranteed.

"The job as an engine driver offers a broad range of tasks," Maruša knows.

Not only does she drive freight trains from A to B. Other tasks are to shift trains, carrying out brake tests, checking the vehicles and safety equipment and preparing the journeys. 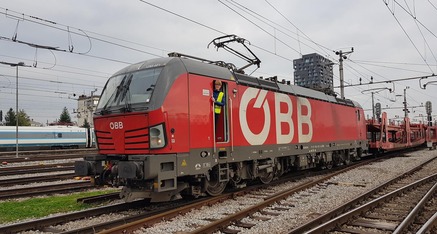 Reliability and punctuality are also your driving forces and your passion? Do you also want to start a career as a locomotive driver at Rail Cargo Group? You can find current job offers of the international RCG companies on our website.

I like
Previous article Review - That was the year 2019 Next article The best solution for Tyrol: piggybacking trucks to the railways